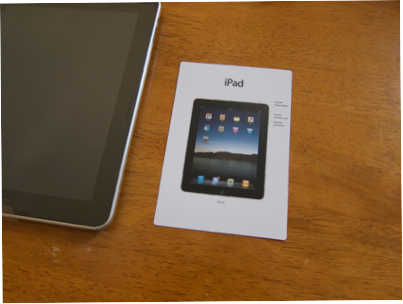 It is weird that iTunes mixes both audio and print books in its “Books” section of the library.  With no way (from the grid view) to tell which are audiobooks and which are print e-books.

Zooming in and out (for example – in a web page) is so fast it amazes me.

Still trashing around looking for a good PDF reader app.  Tried ReaddleDocs (as in purchased it) due to the Dropbox integration, but that functionality goes through their servers, and I’m not certain I like that idea.
Trying GoodReader next.

GoodReader looks pretty good.  Unlike ReaddleDocs, it supports the new way of doc sync via iTues.

The Apple case is nice, and not only protects the screen (when closed), but makes the entire device much less slippery.  Only drawback so far is that you can’t place the iPad into the (optional) dock when it’s in the case.
Due to the slippery factor, I’d suggest that if you don’t plan to have it live in a case, buying a “skin” of some sort for the back might be a good idea.  Either the silicon type, or (my preference) a stick-on skin from GelaSkins.

Update on Charging: The 5W iPhone chargers will actually charge it, but more slowly.  And my MBA seems to charge it as well.  Also appears that even a computer that doesn’t provide enough charging current when the iPad is “awake” might charge it very slowly if the iPad is “asleep”.

I’m spending way more on apps for the iPad than I did for the iPhone.  Wonder if that’s due to it feeling like the apps are worth more since they run on a “bigger” platform?