Rise Of The Amiga 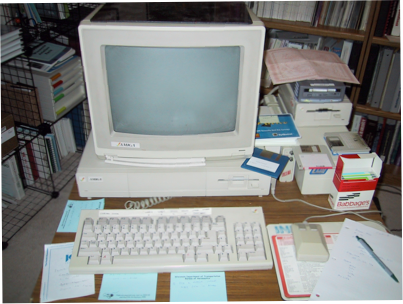 My first “desktop” computer was an Amiga 1000. Prior to that I’d had an OSI Superboard, a Tandy Model 100 portable, and a Tandy 4P (luggable). The A1000 was the first computer that sat only on a desktop. It was also my first color computer.

I look back on those days as the golden era of personal computing, at least for me. It was all pure new fun. Multiple competing designs made it all a big game.

So my collection of Amiga gear was not only retained, but has grown quite a bit thanks to eBay. I’m setting up a small personal “museum”, and what follows are my musings on how to configure the A1000 and A2000.

The plan is to have my Amiga 1000 set up pretty much like it was during the days when it was my primary computer. Well, at least as close as I can make it. I don’t have an image of the ‘C’ development partition from those days, so that at least will only be as close as I can guess it.

(There was a “second age” when the A2000 became my primary computer and the A1000 was used by the wife and kids. In that age, the ‘C’ development partition became the “User” partition and the applications on the “App” partition were skewed towards the family)

This will consist of the C-Ltd 33M hard drive being the primary storage device. The original three partitions will be used – “Cstuff”, “Workbench”, and “App”.

The “Cstuff” partition will contain only Lattice ‘C’ development tools and source for the 1.3 OS.
(The Comeau C++ and OS 2.x development environment came later and was only used on the A2000 as I recall.)

The Syquest 135M external SCSI drive will be used on an “as-desired” basis. This will contain the contents of most/all of the 880K floppies that I used for data storage during that original era. These were copied onto the hard-drive in this modern incarnation just for convenience and (physical) space savings!

Most games will still be played off of floppies, with the exceptions being those that are HD installable. Those will be on the Syquest cartridge.

An additional Syquest cartridge will contain a workbench partition as well as the data off of the other C-Ltd HD partitions.
This will not normally be used, and is kept only to allow booting the system if the C-Ltd HD finally gives up. (essentially a mirror of the C-Ltd HD).

The A2000 will be set up in more of a “modern” configuration, if one can consider around 1990 to be modern!

This computer will contain all of the C++ development tools, as well as the OS 2.x development stuff.